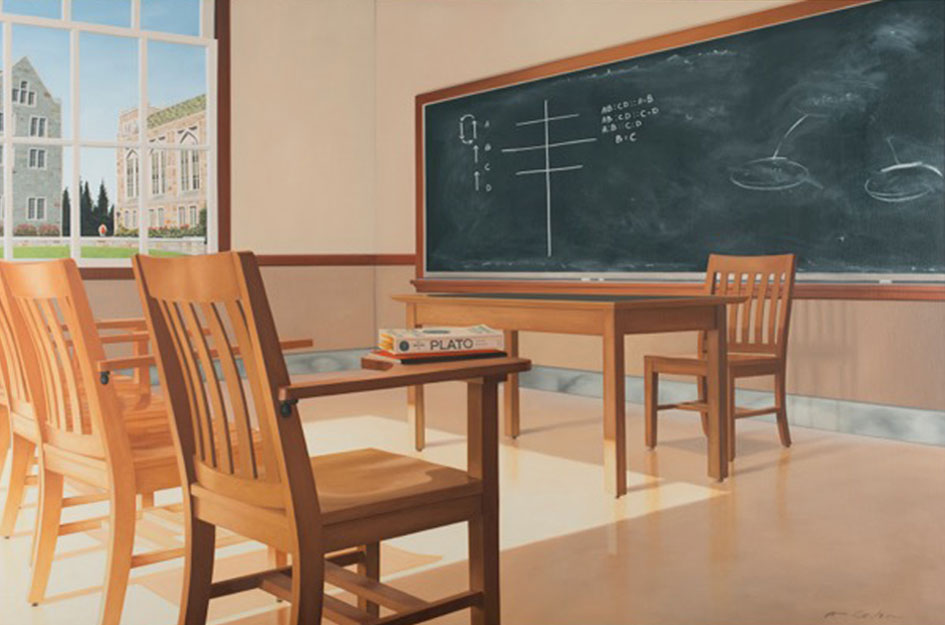 “Professor Taub’s passion for philosophy and education energized the classroom while his integration of personal experience with scholarship quickly elevated his class from a core requirement to an undergraduate favorite.”

“After two weeks in class I understood why students fight to get into Prof. Taub’s courses. He is super intelligent, funny, a great lecturer and a great listener. My absolute favorite class at BC.”

Fundamentally, my study and subsequent teaching of philosophy has been motivated by a faith in the accumulated wisdom of the ages and the belief that the ideas put forward by the greatest thinkers of the Western tradition remain meaningful and relevant today.

I also believe that the doing of philosophy – as distinct from the mere study of famous philosophers and their important texts – requires a level of engagement quite different from other fields. In fact, the doing of philosophy requires a great deal of personal risk. Deeply held opinions and beliefs, personal prejudices, traditions and moral authorities of all kinds are challenged without deference or discrimination. For the reward to be commensurate with the risk it is necessary to create an environment of trust and respect, one where students will feel comfortable and empowered to challenge the author, the instructor, one another and themselves and where objective truth is the only recognized authority and the ultimate goal.

“Prof. Taub used innovative teaching methods, like Twitter, to connect age-old philosophical ideas to modern times. I enjoyed every minute of his class and would take another with him if I could!”

At the same time, I agree with John Dewey that learning is an experience which has no finite beginning or end, that students bring all their previous experiences as well as their personal aspirations to the activity, with the happy consequence that no one student will learn in precisely the same way as another. More so, that each student must be encouraged to take ownership of their own learning and responsibility for the learning of others in order to create a genuine learning community.

“I can genuinely say that I grew as an individual due to the two classes taken with Prof. Taub. He taught me how to approach situations from an elevated perspective and to consider everything thoroughly before being too certain of my opinions.”

“Prof. Taub taught us to reason our way through arguments, form our own opinions and think critically. He always encouraged us to speak up and challenged us to answer our own questions before guiding us to a satisfying solution.”

From these fundamental beliefs, my own pedagogy places personal, customizable participation front and center. Students are asked to create a personal participation rubric at the beginning of each course; they declare how they will participate and contribute and are then graded substantially on their success in reaching their own personal goals. Students are encouraged to be to be innovative; they can write a research paper on Aristotle or tweet regularly about Rousseau; they can present in class or on YouTube; they can ask questions in class or submit them on SocialQA; they can write commentaries or experiment in a design journal. The result is a vibrant learning environment in which every student has a voice and every idea gets a fair hearing.

“Professor Taub’s excitement for the subject constantly fueled in depth class discussion while the many ways in which we were encouraged to contribute allowed students enough freedom to master a complex idea and make it their own.”

“Prof. Taub is one of the best teachers I have had and among the most intelligent yet approachable people I have ever met.  He possesses all the best qualities of what Aristotle calls the ‘high minded man.’”

As an adjunct, I am free from the requirement imposed upon most academics to “publish or perish.” This provides a unique opportunity to explore ideas as and when they move me, upon reflection or in response to the pressing issues of the day. Most of my research is focused on the social, political and moral philosophy of the ancients, in particular, the pre-Socratics, Plato and Aristotle. A second focus is on eighteenth-century thinkers, notably Jean-Jacques Rousseau, Adam Smith, David Hume and Edmund Burke. I am especially interested in Burke’s political and aesthetic work, as it receives comparatively little attention. Many of Burke’s ideas are jarring to the modern ear, yet are a joy to read; they are of keen historical interest and, no matter how out of fashion, challenge us to consider why they should not be adopted as our own.

Thematically, I am particularly interested in the notion of aristocracy, not as it is popularly understood, but in the literal sense first introduced in ancient times, as “rule of the best.” Rather than a class of selfish and self-indulgent individuals, the aristocracy argued for by Plato, Aristotle and later by Burke and others, devotes itself to learning, to service and to developing the sensibility and “elevated view” that will best prepare it for leadership. I argue that even the most democratic societies today comprise a natural or, at least, evolutionary aristocracy, whether political, social or cultural. As Burke observes, “in all societies, consisting of various descriptions of citizens, some description must be uppermost.” To use modern parlance, there will always be a “one percent” by some one or another measure. I created the Noble Leisure Project to explore this idea and to offer a prescription for effective and appropriate social behavior and contribution.

I have also given considerable attention to the notion of “opinion” in our social and political discourse. In his Republic, Plato draws a sharp distinction between the realms of opinion and truth. Today, in the age of Twitter, Facebook and Google, where anyone can post a claim with at least the appearance of authority, that distinction is either hopelessly blurred or deemed entirely irrelevant. I have written extensively about this problem and recently founded The Principal Post to help rectify the harm it creates.